One of the only Democratic regions in Texas lies along the Rio Grande:

This region is the part of Texas that borders Mexico. It is readily apparent in the map above as the only group of blue counties that President Barack Obama won outside of a major city.

The area is one of the most Hispanic areas in the United States; there are places, especially next to the border of Mexico, where the Hispanic percentage approaches 100%. Some of these people have lived along the Rio Grande for hundreds of years, with roots dating back to when Texas was a part of Mexico.

There are several other distinguishing characteristics. The parts of Texas along the Mexican border are among the poorest regions in the United States. Politically speaking, voter turn-out is very low – perhaps lower than any other part of the country.

When the rest of Texas moved steadily Republican, South Texas swung leftwards for much of the twentieth century. In 1996 the Democratic presidential nominee won almost every single county south of San Antonio, some with over 80% of the vote.

Since then, however, Republicans have recovered their verve. President George W. Bush did incredibly well amongst Hispanics in Texas; in 2004 he even won 86% Hispanic Cameron County in the Rio Grande Valley. In 2008 the Democratic presidential candidate once again posted solid numbers along the Rio Grande. Nevertheless, they ran well behind their 1996 performance throughout the region:

Compared to 1988 – a year in which the Democratic presidential candidate suffered a resounding national defeat – the 2008 nominee, despite winning a solid national victory, also failed to improve markedly in the Rio Grande area:

(Note: This image can be accessed here.) 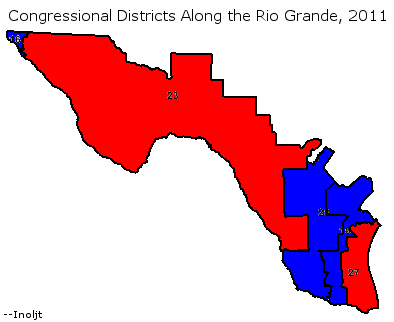 These patterns are not unique to Texas. In rural south Colorado, for instance, traditionally Hispanic counties have also trended Republican since the 1990s.

Whether the areas of Texas bordering the Rio Grande will continue moving Democratic or Republican is up-to-question. In Texas, the effects of Mr. Bush’s appeal to Hispanics still are heard; Hispanics in the state are some of the more conservative in the country. The Texas Republican Party has also been relatively moderate on immigration issues. For instance, Republican Governor Rick Perry – a firecracker on other issues – opposes SB 1070.

Needless to say, Republican success at cutting Democratic margins in the counties bordering the Rio Grande would constitute a major achievement for the party.
If a Democrat is ever to win Texas – and none has done so for more than a decade – he or she will need enormous margins there. If Republicans go from 30+% to 40+% of the vote in El Paso or Hidalgo County, it is very difficult to imagine Democrats ever winning Texas.

For more than a decade Democrats have latched onto the Great Hispanic Hope: that growing numbers of Democratic-voting Latinos in Texas will one day turn the state blue. Republican success at winning Hispanics would crush that dream.

2 Responses to Growing Republican Strength Along the Rio Grande?