Part 1: What If Canada Was Part of the United States?

This is the first part of two posts exploring the political consequences that would happen if Canada became part of the United States. The second part can be found here.

A note to all Canadian readers: this post was written for the intent of a good laugh, and some serious political analysis along with it. It is not meant to offend, and sincere apologies are offered if any offense at all is taken.

Part 1: What If Canada Was Part of the United States? 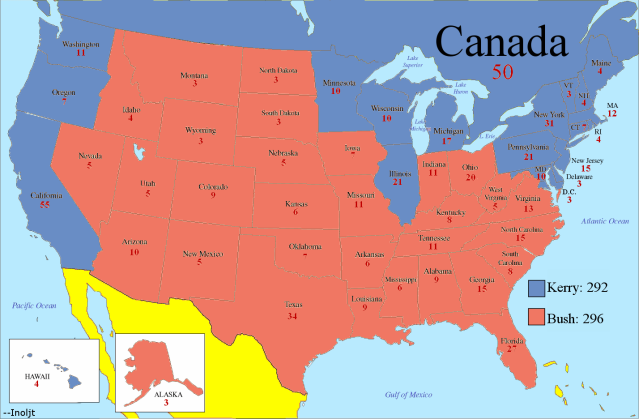 As the night goes on, Mr. Bush begins to feel more comfortable. He’s ahead in the key swing states. Florida is going for him far more strongly than anybody expected, and things are also looking good in Ohio. It also looks like Mr. Bush has picked up a couple of states from 2000.

Although opponent Senator John Kerry has yet to concede, the celebration at party headquarters has already started. Drinks are opened. People begin cheering.

Then chief strategist Karl Rove comes in, ashen-faced. He turns to the president. “We’re in big trouble. Canada and California are just about to report, and I don’t think that we have the electoral votes to overcome them.”

Mr. Bush is befuddled. “What? Canada’s part of the United States? I always thought it was a different country.”

Mr. Rove looks puzzled. “No,” he says extremely slowly. “It became part of the United States after the War of 1812.  Are you all right, sir?”

Mr. Bush laughs. “Of course I’m fine. Just wasn’t thinking for a moment. Of course Canada’s part of the United States. Always has been.”

Canada in the Electoral College

How likely is this scenario?

Well, of course Canada will not probably not become part of the United States anytime soon. Most Canadians are perfectly happy being separate from America. There is little to suggest that this will ever change.

Nevertheless, it is still quite fun to think about the possibilities.

According to Canada’s population clock, the nation has an estimated 34,400,000 people (as of March 2010). This is slightly less than California.

This is a simplified version of things; the process of apportionment is quite actually somewhat more complicated than this. But at most Canada would have a couple more or less representatives than this. It would also have two senators, adding two more electoral votes to its 48 representatives.

Canada would thus add around 50 electoral votes in the electoral college:

These votes would almost certainly be Democratic ones. Most people would agree that Canada is a more liberal place than the United States. This is fairly apparent in the policies Canada pursues; it has universal health care and is less skeptical of climate change than the United States. It would not be too unreasonable to suggest, therefore, that Canada would vote for the more liberal party.

Adding another California to the United States would definitely be a good thing for the Democratic Party. Nevertheless, one should not overemphasize Canada’s importance. After all, it’s population is barely one-tenth that of the United States.

Here is one such scenario:

This is an entirely possible scenario. Mr. Bush lost Wisconsin by 0.4%. A shift of less than 10,000 votes would have given Mr. Bush the state.

While the addition of Canada would shift America leftward, it is easy to overstate the degree of this. The next post will explore this topic more.

11 Responses to Part 1: What If Canada Was Part of the United States?