The Demographics of America’s Governors: Religion

Outside of place of birth, this was the hardest category to get information on. Unlike race and gender, which are pretty obvious, your face doesn’t indicate which religion you are.

Sometimes governors, especially Republicans, talk about how much religion has guided them in the lives while never actually revealing their denomination. It takes a bit of searching to confirm that they’re actually Protestant. John Kasich and Rick Scott are good examples of this.

Other times it’s extremely unclear what religious affiliation a governor actually holds. Wikipedia indicates John Kitzhaber of Oregon as being “Other Christian,” but other sources indicate him as Jewish. I put him as Jewish (feel free to inform me if I’m wrong). Information is also very scarce on Peter Shumlin of Vermont, who apparently is Agnostic or Atheist.

In any case, my research led to the following map. The map below indicates the religion of each governor of the United States as of August 2012: 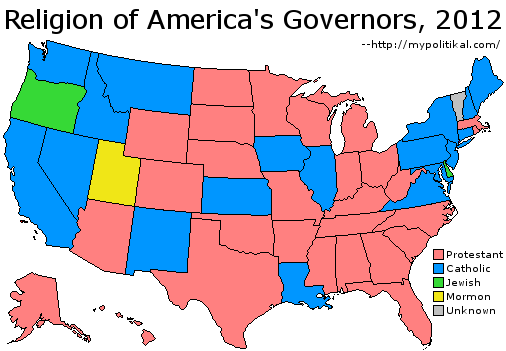 Catholics actually punch above their weight here. While they’re only one-fourth of the overall population, Catholics govern 36% of the states. Those states compose 43% of the nation’s population. 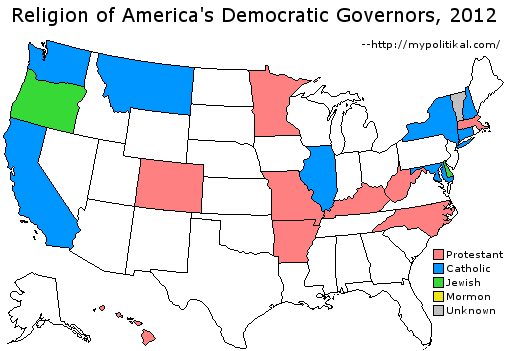 Both Jewish governors are Democratic. So is Peter Shumlin of Vermont, the probable Agnostic or Atheist.

Let’s take a look at the Republicans: 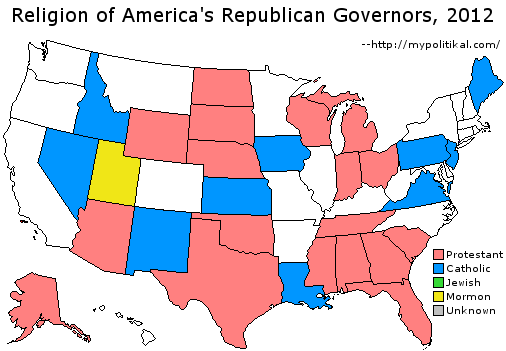 There’s not much difference between the nation as a whole and the states governed by Republican governors. There are a few more Protestants and a few less Catholics. The sole Mormon governor is also a Republican.

There used to be a time when Catholics and Jews found it harder than Protestants to get ahead. It seems that those days of discrimination are mostly over. On the other hand, Agnostics and Atheists will still find the path to becoming governor quite difficult. So will those who profess a faith that is neither Christian nor Jewish.