There are three defining moments of American history after 1800, and this post will examine them. They are the Civil War, the Great Depression, and the Second World War. How did these events affect the economy?

Before the Civil War, in 1860, this was how America was doing:

The Civil War was a devastating event. It killed more Americans than any other war in history and destroyed the South’s economy. How did that affect the United States? 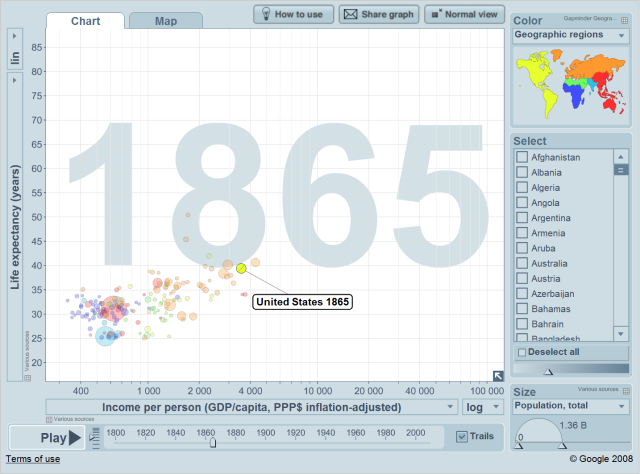 Well, here’s the United States in 1865. In fact, the population and the economy of the United States has grown. The latter is in large part due to the effective economic policies of the Republican Party under Abraham Lincoln. It is true that living standards have grown slower than elsewhere. Still, the United States is very wealthy and very healthy after its worst war in history.

One ought to ignore the life expectancy statistic here, however. The previous post noted:

Obviously this model fails during the Civil War.

The United States is the richest country in the world in 1920, although in terms of health it isn’t doing as great.

Let’s take a look at what happened afterwards.

Look at the other countries, however. As badly as the United States is doing, livings standards are still the world’s best. Only Brunei (due to its oil), Luxembourg, Switzerland, and the United Kingdom have a higher GDP per capita adjusted to inflation and purchasing power parity.

World War II was good for the United States and bad for most of the rest of the world. In a sense, the United States was more powerful than at any other time in its history in 1945. Let’s take a look at the effect of WWII, beginning in 1940 at the start of the war:

In 1940 Germany and the United Kingdom are almost at par with the United States. As is typical, however, America is slightly ahead of the First World in terms of livings standards but just above-average in terms of life expectancy.

Here’s what five years of war did: 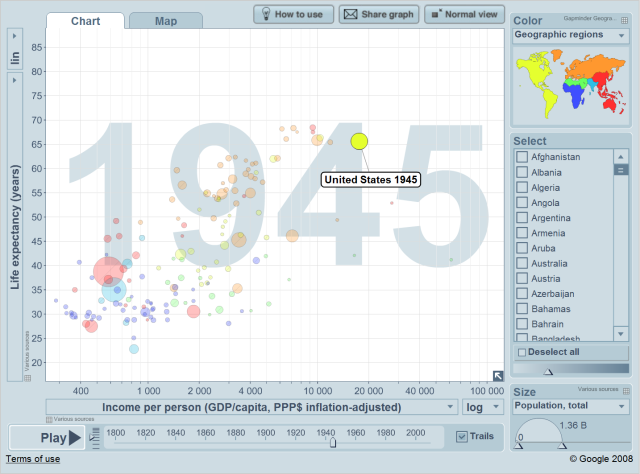 The destruction of World War II does enormous damage to the rest of the world, which falls behind. Only Brunei and Kuwait, due to oil, have higher GDP per capitas adjusted for inflation and purchasing power parity; their low life expectancy shows that this isn’t really an accurate reflection of their true economic strength at this time. At this time, the biggest countries behind the United States are Canada and the United Kingdom. The United Kingdom has a GDP per capita (adjusted for inflation and purchasing power parity) of $9,931; the United States $17,615.

Of course, this nice situation for the United States couldn’t have lasted forever. Absent a nuclear attack against the Anglosphere, the rest of the world would have started to catch up with the United States again. And, indeed, this is what happened.

It’s quite interesting how relatively little affect these great historical events had on American livings standards and life expectancy. Unlike other countries, the United States just keeps on a slow and steady growth path. It remains near the top or at the top. It would take quite a change – something far worse than the Civil War or Great Depression – to destroy this equilibrium.